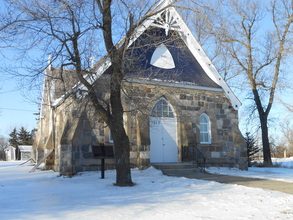 Between 1890 and 1910, more than 200 Methodist and
Presbyterian   churches were built in Manitoba. While most were small, wood-frame buildings, some larger church communities were able to build more elaborate churches of brick or stone. Occasionally, a small congregation might undertake such an ambitious project.

In 1896, local stonemason Henry Winter was  commissioned to build the Presbyterian church. His design, with its rugged stonework, pointed Gothic-style windows, and restrained woodwork, recalls the small parish churches of Scotland and England. In Manitoba, Griswold United is one of the fullest expressions of that tradition.  The church's designation date is October 24, 1898.